Really just an experiment of thought:

Not seconds after Alabama quarterback John Parker Wilson lunged across the goal line in overtime Saturday night in Baton Rouge to seal the a win over LSU and an SEC Championship game berth, the murmers began.  Can The Tide really be the #1 team in the nation?  Can they really give the robotic Florida Gators a challenge in Atlanta on December 6th?  Can they really contend for a national championship?  Is this another fluke year like 2005 (Bama started 9-0) where the competition has just been poor up until this point?

Against LSU, Bama played some of its worst football of the year and was graciously aided by the Tigers’ green quarterback, who pitched four interceptions in the game, including one that was returned for a touchdown.  The game was not “supposed” to be that close, and many critics claim that if bad boy Ryan

Perriloux was still the signal caller at LSU, The Tide would’ve lost.  Well, IF only LSU had just scored more points than Alabama, they would’ve won the game.

Well, IF only, at the end of the game, the scoreboard showed that LSU had won, LSU would’ve won

IF only the team with the least points was declared the winner, then LSU would've won the game.

All “ifs” aside, Alabama still looked rather crappy.  However, The Tide yet again scored more points than its opponent, won the game, and is now 10-0 with a trip to the SEC Championship game assured.  But judging by Bama’s 10 opponents, as they have performed since playing Nick Saban’s football team, the critics believe the team may be overrated.  Everyone may have jumped the gun when The Tide smashed Clemson in week one, or when they demoralized Georgia in week five.

Let’s take a look.  After the jump, our analysis on Alabama’s wins so far, with ratings of BAD, DECENT, and GOOD.

49-14 Arkansas (Fayetteville, Ark.)(2-0) – BAD.  The Razorbacks are making strides, buying into Bob Petrino’s system, and look to be improving.  However, when Alabama ravaged them in week 4, they were far from beginning any sort of incline.  Not much to criticize in this game, even now, but it could definitely be considered an illusion in relation to judging how good Bama was then or even now.

41-30 Georgia (Athens, Ga.)(4-0) – GOOD.  The Bulldogs were #3 in the country when Alabama pantsed them in a blacked-out Sanford Stadium.  Second half, blah, blah, blah…that was an ass-kicking from start to finish.  They were considered by many before the season to be the best team in the SEC and viable national title contenders.  Since losing to Bama, UGA has won all but one game (a blowout loss to Florida, the nation’s new favorite to win the BCS title).  The Bulldogs are not the country’s top team, no doubt, but they are still a 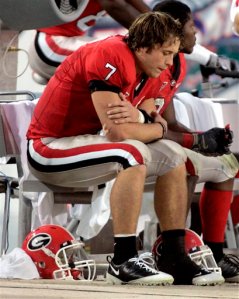 Georgia: GOOD, despite getting pummeled by the nation's hottest team, Florida

pretty good team.  The recent struggle to defeat Kentucky was a letdown, but UGA prevailed with more points than the Wildcats (see Alabama-LSU), and that’s all that matters.  The SEC is tough every week, and Bama’s rout over Georgia is its best argument that it is not overrated.

17-14 Kentucky (Tuscaloosa)(4-0) – DECENT.  At the time, Kentucky was a decent team.  Alabama did underplay in this matchup, but really tapped the brakes in the second half despite only a 10-point lead, which could’ve been attributed to several “excuses,” such as Glen Coffee’s first quarter fumble inside the Wildcats’ 10-yard line and a late phantom pass interference call against receiver Julio Jones that stymied a powerful Tide drive.  Kentucky scored with little time on the clock to make the win look closer than it was, but that’s football, and Alabama won the game.  Doesn’t matter if only by three points over a team that has since slipped a little due mainly to critical injuries (well, a lot against Florida – final score: 5-63 – …there the Gators are again…man, they’re good).

24-20 Ole Miss (Tuscaloosa)(3-3) – DECENT.  When the Rebels came to Tuscaloosa, they were an up-and-down team.  They had suffered losses to Wake Forest (unacceptable) and Vanderbilt (unacceptable) but somehow pulled an upset over godly Florida (the only time this season so far the Gators have shown mortality).  But critics will say the win over Florida was a fluke, which it was, and Alabama shouldn’t have struggled to beat Ole Miss as it did.  The Rebels actually had a chance to win the game against The Tide, but Alabama once again answered a call and when the clock hit 0:00, another win was in the books.  Since that contest, Ole Miss has done some of its own “doing what needs to be done” and has defeated Arkansas and Auburn.

35-0 Arkansas State (Tuscaloosa)(4-3) – BAD.  Could probably beat Tennessee, but Alabama’s solid performance against the Red Wolves is no indicator of anything.

27-21 LSU (Baton Rouge, La.)(6-2) – GOOD.  The Bayou Bengals are having a tough year.  Before falling to Alabama in overtime, their wins were against all terrible teams, except the one at South Carolina, but even that was not impressive.  Their losses were bad, against Florida and Georgia.  But last weekend’s game was their biggest game of the year, by far.  In Baton Rouge, day or night, and playing like piss, The Crimson Tide’s win was incredible.  Alabama once again found a way to win.

So that’s six BAD‘s, two DECENT‘s, and two GOOD‘s.  Based on the wins so far, Alabama is not blowing every team out, and is arguably playing poorly against some teams it should be killing.  A man on the radio in Birmingham, Ala. said Florida is a better team than Alabama.  That is perfectly fine.

Here’s our summary: Even if Florida could beat Alabama nine times out of 10, that means Alabama would win one of those.  These two teams are only gonna play each other once.  And that’s all it takes to get a win.  Every single game this season, all 10 of them, Alabama has done all that matters, and that is do what it takes to win.

No predictions on that game yet because The Tide must beat Mississippi State and Auburn before even thinking about the Gators, and whether they win each of those games by 35 points or one point, it won’t matter.  Losses in both are possible, as MSU has beaten UA two years in a row, and AU has beaten UA six years in a row.

6 comments on “Is Alabama Really That Good?”