…when a Democrat wins the presidential election in the same year.

In fact, Alabama has never lost the Iron Bowl when a Democrat wins the presidential election in the same year.  The Tide is 6-0 in these years (and has therefore won Six-in-a-Row over the Tigers in these years). 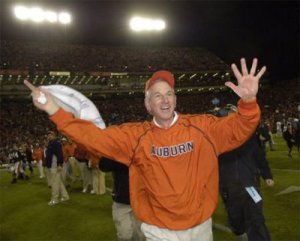 "No, six! Six million! I know! I can't believe it either!" Photo and Caption Courtesy of 3SIB.

Didn’t think the DCT statistic gnomes were done with the presidential election year factoids, did you?

This has been reported and mentioned before, but still interesting.

That’s right.  With all the focus on Auburn’s six-game winning streak over arch-rival Alabama, the nation’s current #1 team, folks may be overlooking the history of the nation’s #1 elected position when barking off about the nation’s #1 rivalry.

The rivalry matchup has only been played the same year as an election seventeen times (Why only that many?  Remember the tie that lasted 4 decades?).

Auburn is 6-0 vs. Alabama the last six meetings.

Auburn is 6-0 vs. Alabama in Tuscaloosa.

Alabama is 6-0 vs. Auburn when a Democrat wins the presidential election that year.

Here’s a look at Alabama vs. Auburn when a Democrat is elected President of the United States:

Both schools had footballers by then, and a Democrat, Grover Cleveland was elected POTUS, but they did not play each other for the first time until February 1893 (and again in November 1893).

The Missing Years.  In 1907, both schools refused to budge, ending the game 6-6, the only tie in the rivalry’s history.  Fitting it was, as the standstill lasted 4 decades.  Through two World Wars and ten presidential elections which produced six different Presidents (3 Dems), the teams did not meet.  All over 34 bucks (roughly equal to $750 today).

Finally, after several state legislature resolutions and a chance meeting between both schools’ presidents, the rivalry was resumed in 1948.  On Nov. 2nd, Harry S Truman, who had stepped into the presidency three years prior when FDR died in office, was elected by Americans this time.  He entered the race as a major 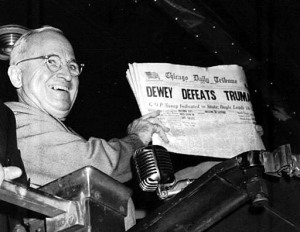 underdog.  In fact, officials at the Chicago Tribune felt so confident Republican challenger Thomas Dewey would knock Truman off his perch, they authorized the printing and distribution of an early edition of the newspaper on Nov. 3rd, with the headline: DEWEY DEFEATS TRUMAN.   When it became clear this would not be the case, Tribune workers scrambled to retract distributed copies with the premature declaration.

Almost exactly one month later, on Dec. 4th, Auburn entered the renewed Iron Bowl as a major underdog.  The Birmingham News headline declared the next day, TIDE BITCH-SLAPS TIGERS.  No retractions were necessary.

The 1960 election was a close shave for JFK, as he narrowly defeated Dick Nixon.  It was the first race that featured two candidates born in the 20th century and symbolized the impact of a new generation in America. 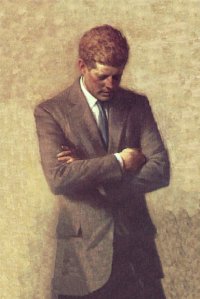 'Bama never lost to Auburn while JFK was in office. He probably cheered for Notre Dame, though. Damn Catholics.

A new generation of football was emerging in Alabama as well, symbolized by the return of Bear Bryant to his alma mater a couple years before and his early nabbing of advantage in the series vs. Auburn.  After losing a close one to the Tigers in the soon-to-be legendary coach’s first season, Bryant’s Tide won the next four (1959-1962) by a combined score total of 85-0.  The ’60 Iron Bowl was as close as the national election, and Alabama prevailed using only a second quarter 23-yard field goal by place kicker Tommy Brooker.  Bryant’s defensive mentality had become the Word for his players, and they allowed the Tigers across the 50-yard line just twice the entire day.  The ‘Bama defense also snagged three interceptions.  Defense is key for a great team.

Johnson rode America’s obsession with John F. Kennedy to a blowout of Republican challenger Barry Goldwater in the Election of 1964.  JFK’s former Vice-President knew how to capitalize on opportunities, and he warned the country that Goldwater may be dangerous for foreign relations (particularly in the nuclear warfare category).

Alabama, a heavy favorite over Auburn that year, entered the game undefeated.  Fitting for playboy Tide quarterback Joe Willie Namath, it would be the first nationally televised Iron Bowl, and viewers got all they could handle.  However, the Tigers led the powerful Tide at halftime, 7-6.  But it was ‘Bama halfback Ray Ogden, not the glitzy Namath, who provided the game’s most television-worthy play of the day.  Ogden returned the second half opening kickoff 107 yards for a touchdown to put Alabama ahead.  Namath did get his pretty face and arm on the highlight reel later, tossing a touchdown to future Bear successor Ray Perkins in the 4th quarter to seal the win.  The Tide would go on to win Bryant’s second national championship, the school’s eighth, despite falling to Texas in the Orange Bowl.

Joe Willie Namath: "I Can't Wait until Tomorrow. 'Cause I Get Better Looking Every Day."

Both Carter (POTUS, 1977-1981) and Doug Barfield (AU head coach, 1976-1980) are good people.  But their tenures in the respective positions will forever be remembered as “rocky.”  It was a bunked-up era in America, and Carter caught heat for problems beyond his control.  The people just wouldn’t listen to him.  Barfield couldn’t get it together either.  1976 was just the beginning.  Carter edged Gerald Ford in the election in November.  Alabama was even having an “off” year (finished with a whopping three total losses for the season) but still drummed Auburn later that month.

Last time a non-incumbent Democrat was elected.  The last time ‘Bama won a national title.  Nobody gave Auburn a chance in that one either.  The game was deadlocked at halftime in a scoreless tie, but Tide defender Antonio Langham intercepted a Stan White pass and returned it for a touchdown, and Alabama never looked back.  Everyone knows the story about how The Tide went on from this game to defeat Florida in the SEC Championship and kick the shit out of loud, proud, on-a-cloud Miami.

Clinton, who was born in Arkansas (like Bear Bryant), had little trouble beating challenger Bob Dole.  Dole was old (even back then), and that’s what old people do.  They lose.  Except for Gene Stallings.  His final year coaching the Crimson Tide was decent (only 10-3 with a trip to the SEC Championship game).  The 1996 Iron Bowl was a good one, but it was apparent AU coach Terry Bowden’s magical success was on the brink.

Rumor has it, Stallings promised quarterback Freddie Kitchens a rack of cow for every touchdown pass, and the big bruiser opened the game looking more like Joe Montana and less like Jabba the Hut, as he had been

Freddie Kitchens, shown here in a recent photo, has trimmed down since his college days, but he's still a hunk-a-hunk-a-burnin'-love. Prior to the 1996 Iron Bowl, he had voted in six presidential elections and has not missed one since. Kitchens is currently coaching tight ends for the Arizona Cardinals. Damn, he looks good for 51-years-old!

infamous for imitating sometimes.  On The game’s initial drive, Kitchens, who weighed roughly 406 pounds and could compete with Mt. Cody in a wedding cake-eating contest, pitched one of his Ricky Vaughn fastballs to tailback Curtis Alexander who raced 63 yards for the score.  The Tide tacked on another Kitchens TD pass (this time to receiver Michael Vaughn) and a Jon Brock field goal to jump out to a 17-0 lead over the Tigers in the first quarter.

Auburn fought back though and actually took a 20-17 lead into halftime.  Both defenses awoke for the second half, but with a little over two minutes remaining in the contest, Alabama took over deep in its own territory, trailing 23-17.  Kitchens remembered Stallings’s promise and led his offense 74 yards down the field and into the endzone.  The game-winning drive was capped off by a Kitchens-to-Dennis Riddle touchdown screen pass with 26 seconds remaing that will forever be a highlight in Iron Bowl lore.  Brock’s extra point gave Alabama the winning edge, 24-23.  Auburn fans still wonder why linebacker Takeo Spikes suffered paralysis in his legs when Riddle juked him to cross the goal line.  Three racks of cow for the 39-year-old Crimson Tide quarterback that evening!