This is Part Three of a five-part series counting down the greatest Iron Bowls of all-time. This year’s game will be played Saturday, November 29th, 2008.  The titles for each game are taken from Bill Cromartie’s Braggin’ Rights, the authority on every Iron Bowl ever played.

Fifty-three Iron Bowls and not a one in Auburn.  The annual matchup had been played in Montgomery, Tuscaloosa, and Birmingham, the last 41 on Legion Field in the Magic City.  The ’89 fight would be the first in Auburn.  Legion Field, once utilized by both schools for other games on the schedules,

In December '89 Pat Dye led his Auburn Tigers into Jordan-Hare Stadium, where the field is now named for him, to play Alabama, a school at which he once coached. It was Alabama's first trip to Auburn.

had become another home for ‘Bama, and Auburn had phased out its use of the site long ago except when the Iron Bowl rolled around each year.  So after a push by AU head coach Pat Dye to make the rivalry game a home-and-home series, the schools would finally meet on true orange-and-blue turf.

Under Dye, who took over an ailing program in 1981 and struggled that first season, Auburn had developed and was 5-3 against its nemesis heading into the monumental bout.  In Dye’s second season, he and the Tigers had broken Bear’s nine-game domination over the series.  Not only that, Coach Dye and his team had won the past three over Alabama.  Despite being 10-0, ranked #2 in the country, UA head coach Bill Curry and The Tide were facing a different Auburn program than Bear had whipped like a red-headed step-child most of his years.  And they had to play them in a strange place most UA players had only read about or seen on game film: Jordan-Hare Stadium.

The hatred between Alabama and Auburn spewed over in the weeks leading up to the first meeting on the Plains.  A couple Tide players received death threats, UA head coach Bill Curry threatened FBI investigation, and Dye criticized him for it.  It was obvious the undefeated, second-ranked Crimson Tide was a little wary 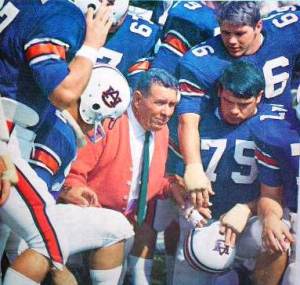 Dye's '82 team was the first Auburn group to beat Alabama since Shug Jordan's Amazins did it in 1972. By kickoff of the '89 game, Dye and AU had bested The Tide five times, including the previous three-in-a-row.

Auburn marched right down the field on that first drive, heavily aided by a 44-yard heave from quarterback Reggie Slack to a streaking Wright, who hauled in the beautiful lob over his shoulder and went down at the UA 7-yard line.  A few plays later, tailback James Joseph crossed the goal line for the game’s first score.  Less than three minutes into the game, and the home team Tigers were ahead on the #2 ranked visiting Tide, 7-0.

‘Bama’s initial offensive drive was stalled and resulted in a punt, but The Tide got the ball back deep in AU territory when mad Elephant George Thornton shellacked Tiger back Electron Williams, causing Williams to fumble at the 21-yard line.

Siran Stacy was the Rock for the Alabama offense in 1989. The tailback rushed for over 1,000 yards that year and led the SEC in scoring.

Tailback Siran Stacy broke loose on first down and found himself one-on-one with AU defender Dominko Anderson.  The safety perfected a form tackle on Stacy at the 5, and ‘Bama was first-and-goal.  Three attempts at the endzone later, and UA was forced to kick a field goal.  Oh, how important that stop by Anderson was.  Auburn 7     Bama 3.

Soon thereafter, The Tide offense drove back to the Tiger 3.  The ’89 Auburn defense often played well backed up to its own goalposts, and this scenario played out much like Alabama’s earlier visit to that area of the field.  Three plays later, it was again 4th down with 5 yards to go for a score (Stacy had been mauled for a two yard loss on first down).  Bill Curry, who never figured out Auburn in his twelve games as a head coach on the opposite sideline of the Tigers, called for his kicker, just as he’d done the first time ‘Bama was knocking on the door.  But this time it was a fake.  The Auburn defense was not fooled.

It looked like an Auburn kind of day, and the thunderous roar of the big crowd could be heard all over Lee County.  What very well could have been a 14-7 Bama advantage was actually a 3-7 Bama deficit.  (Cromartie 351)*

Auburn couldn’t get much offensive mojo cooking, and near the end of the first half, Alabama all-world linebacker Keith McCants picked off a Reggie Slack throw near the UA 37.  The Tide methodically inched down the field until finally quarterback Gary Hollingsworth slung a bullet to Marco Battle for an 18-yard touchdown.  So Alabama went into the locker room with a 10-7 advantage but knew it could’ve been plenty better.

On the first drive of the second half, ‘Bama reached the Tiger 30, facing 3rd-and-one.  Instead of running up the gut to convert on the short distance, the Tide coaches opted to call in a play-action pass.  It would

Bill Curry is 0-12 vs. Auburn as a head coach. He is 1-14 all-time against the Tigers, his only triumph coming as captain of the 1964 Georgia Institute of Technology football squad.

have worked, as fullback Kevin Turner found himself alone to make a grab after a short route, but Hollingsworth pitched a dud.  Fourth-and-one.  This is when Bill Curry began flipping quarters on decisions.  Each time, George Washington would lie to him.  Doyle came onto the field to attempt a 47-yard field goal…into the wind.  He didn’t kick it hard enough.  ‘Bama failed to capitalize again, and it was only a matter of minutes before the momentum would finally shift in this 54th Iron Bowl.

On the Tigers’ next drive, Slack and receiver Shane Wasden, the heroes of Auburn’s heart attack win over Florida earlier in the year, connected on a beautiful throw, catch, and run.  The big play was good for 58 yards down to the Tide 10.  A couple plays later, Joseph went up and over the top, Bo Jackson-style, for his second touchdown, and Kicker Win Lyle’s extra point was good, putting AU ahead, 14-10.

Yet again, ‘Bama traipsed the field into AU territory on its next possession, but a Turner fumble at the 26 gave the ball right back to the Tigers.  Slack threw his third canon shot of the game, this one to the speedster Wright, good for 60 yards to the UA 14.  The Tide defense held steady, though, but Lyle added 3 points to the lead.  Auburn was ahead, 17-10 with plenty of time left.  After a UA punt, the Tigers found their rhythm and drove 80 yards to score another touchdown, a 12-yard scamper by Electron that made it 24-10 with the Lyle point-after.  On Alabama’s ensuing drive, AU defender Darrell Crawford intercepted Hollingsworth on UA’s side of the field, and Lyle added 3 more with 9:36 left in the game.  Auburn was beating #2 Alabama 27-10, the Tigers biggest Iron Bowl lead in two decades.  At home. 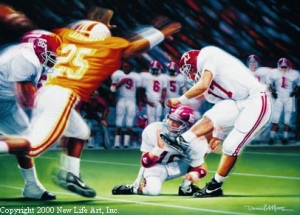 "To Kick or Not to Kick." Bill Curry's eventual departure after the season had a lot to do with his decisions in the kicking department. Philip Doyle, shown here the following season kicking a game-winner vs. Tennessee, was an integral part of the '89 Iron Bowl. His counterpart in blue, Win Lyle, was too.

Hollingsworth and his offense rebounded quickly, taking the ball 73 yards in a little over a minute and a half, and scored on another Battle touchdown reception.  27-17, Tigers with almost eight minutes still on the clock.  Plenty of time in this series.  Alabama soon got the ball back and picked up where it had left off, reaching the AU 6 with a little less than two minutes to play.  Fourth-down and goal from the 6.

With such little time, the logical call would be for ‘Bama to go for the touchdown, as a potential last shot for victory or tie would come with mere seconds remaining.  Instead, Curry called for Doyle, who booted it through the uprights amid a tidal wave of boos from the Crimson Tide faithful.

So now it was 27-20, Auburn, with 1:49 on the clock.  If Curry had called for a touchdown try and converted, the UA defense could hold the Tigers to a punt or field goal, which would put ‘Bama in position to tie with a field goal or win with a touchdown.  Now, all the Tigers had to do was add another field goal, or at worst, punt and prevent Alabama from scoring a touchdown.  After recovering an onsides kick, that’s exactly what Auburn did.  With 00:33 remaining, Win Lyle trotted onto the field, lined up the nail in the coffin, aimed, and hammered it in.

Pat Dye was a fucking football coach.  And his speech to the team after the ’89 fight was one of his best:

‘Bama would fall to eventual national champion, Miami, 33-25, in the Sugar Bowl.  Despite a 10-2 record, a share of the SEC championship, SEC Coach of the Year honors, and at least one national coach of the year award in ’89, head coach Bill Curry and Alabama parted ways.  Many at UA were disgruntled by certain Curry decisions such as the ones he made in that year’s Iron Bowl, and he was 0-3 vs. Auburn while at UA.  Rumors swirled that the coach would not accept certain clauses in his new contract that were written concerning his success against Auburn.  He soon became the head coach for the University of Kentucky for the next season, where he stayed for seven years and lost to the Tigers twice more.

Pat Dye’s Auburn Tigers pummeled SEC whipping boy Ohio State, 31-14, in the Hall of Fame Bowl.  The ’89 squad was a co-champion of the SEC and finished the season 10-2.  Their late success created lofty expectations on the Plains for the 1990 college football season.  That team was ranked #3 in the preseason and reached as high as #2 in the land before petering out toward the end of Dye’s tenth year as AU head coach.