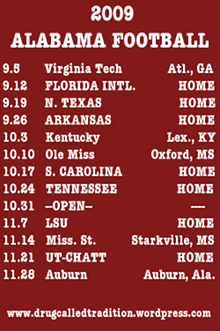 Tuberville was told by university officials to “get the hell off this campus before we shove one of your duck-blasting shotguns up your sorry Arkansas ass” resigned peacefully, with no pressure whatsoever.

Only eight days after Tuberville’s exit, Auburn is pulling out all the stops in its quest for a new football coach, and a new leading candidate has emerged. 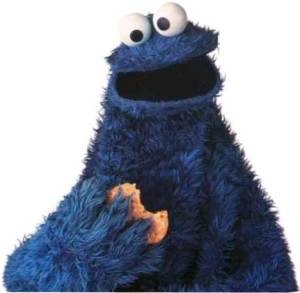 According to confirmed reports, the Cookie Monster is now among the leading candidates for Auburn’s head coaching position.

It’s the latest twist in this search excursion – one that has already included serious interviews with Turner Gill, Patrick Nix, and Rodney Garner. Auburn athletic director Jay Jacobs and university president Jay Gogue believe they are heading in the right direction.

Jacobs and Gogue arrived back in New York, where they are meeting with other serious candidates, late Tuesday evening following what both described as an “intense” interview with The Cookie Monster.

Jacobs, a former Auburn offensive lineman and current A.D., said he likes Coach Monster’s record and statistics on paper, and that’s what prompted him and Gogue to fly into Sesame Street for the interview on Tue. afternoon.

“I think we really got a feel on Coach Monster…really got an opportunity to get into his head and see what he’s all about,” Jacobs told DCT. “We’re taking a serious, serious look into our options with this guy…he really impresses us.”

Gogue’s comments mirrored those of Jacobs.

“This is not some token interview because Coach Monster is obese…or because he has blue fur or anything,” Gogue promised. “And it’s surely not a ploy to distract people while we hammer out the details of a contract with another candidate.”

Coach Monster did return DCT’s phone call, and he definitely seemed excited about the interest from a big-time program such as Auburn. 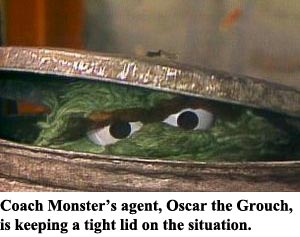 After a lengthy explanation of his core football philosophies, the coach vibrantly added, “Me eat cookie!!! Nom nom nom nom!!!”

Keeping with his comment earlier this week that AU will be conducting its search “the right way,” Jacobs contacted Coach Monster’s athletic director, Grover, to receive the go-ahead.

After endorsing the interview, Grover told Jacobs in his classic contraction-less way, “Remember this, Jay, it is very important.  Even if the Board of Trustees makes you an A.D., do not attempt to do anything on your own, especially with the coaches.  Because you cannot do it.  You do not have super powers.  Because there is only one SuperMan at Auburn.  And that is Bobby Lowder.”

The Cookie Monster’s agent, Oscar the Grouch, declined to comment on Auburn’s serious interest in his client. Nevertheless, put the Cookie Monster at the top of the long list of possible replacements for Tuberville at Auburn. We here at DCT think this candidate may be the one.